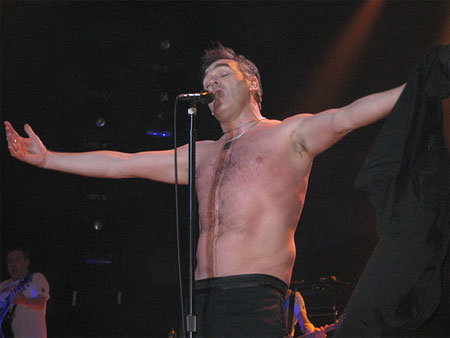 Morrissey can still whip ’em into a froth by removing his shirt, which he did several times at three sold-out concerts in Pasadena over the weekend. According to one concertgoer, there was a near riot as fans played a tug-of-war over one of what the Inland Valley Daily Bulletin called the “holy cloths”: “Although security wasn’t any tighter than usual, it managed to keep Morrissey’s overzealous admirers off the stage until the end of the evening (one guy broke away and touched the singer).”

Glad to see he’s still got it in him.

You may have missed…
The Smiths, Mii Style [tr]
Douglas Coupland vs. Morrissey [tr]