New Jersey’s civil union law, passed in December, takes effect this Monday, and apparently the fact that gays and lesbians have come one step closer to having the same rights they do has a coalition of “pro-family” and religious groups worried. 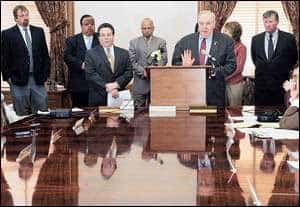 The Coalition to Preserve and Protect Marriage has begun printing petitions so they can begin collecting signatures to get a measure on the November ballot that would define marriage in that state as between a man and a woman, even though a poll taken in October of last year by Rutgers-Eagleton showed that 53% of the state’s residents opposed amending the constitution.

These groups, led by John Tomicki (at podium) are so threatened by the ideas of gays and lesbians getting marriage rights that they are initiating a referendum process that is not even recognized by the state’s laws. Their hope is that presenting the legislature with lots of signatures will convince them to put it on the ballot.

Said Steven Goldstein of Garden State Equality: “If anything, the momentum of the state is going entirely in the other direction toward marriage equality. There’s not going to be a ban.”