Tony Blair addressed the British gay rights group Stonewall yesterday at a dinner at the Dorchester hotel in London, and recalled the work he had done over the years as Prime Minister advancing gay rights in Britain. 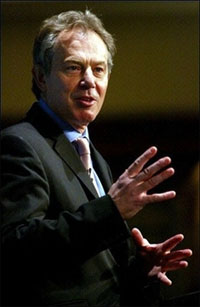 Blair told the crowd of the “pride” and “joy” he experienced upon seeing the first civil partnerships take place in the UK: “I was so struck by it, it was so alive, I remember actually seeing the pictures on television. It is not often that you sort of skip around in my job, I can assure you, But it really the fact that that the people were so happy and the fact that you felt just one major, major change had happened, of which everyone can feel really proud. And now I think we were just saying, was it 16,000 civil partnerships, and what is interesting now is that other countries in Europe are looking at this legislation, and it is very divisive still in Spain and Italy at the moment. But nonetheless it is happening…There are a whole load of different pieces of legislation, which I will not rehearse here, but what has happened is that the culture of the country has changed in a definable way as a result of it. And here is what I think is really interesting. The change in the culture and the civilising effect of it has gone far greater than the gay and lesbian community.”

Blair also reminisced about a speech he gave in 1994 regarding an amendment on equality on the age of consent in the UK:

“They had come together to move an amendment on equality on the age of consent. The thing that really struck me, re-reading the speech this evening, was just how a whole lot of things that nowadays we would more or less take for granted.

I mean, you had to start literally with the very, very first principles. including arguments like: “how do you stop people being persuaded to be gay?”

And I was thinking that is an interesting idea.

And he said to me: “No, no, of course not, of course not.” And I said: “But maybe it is the same the other way round?” He had never thought of it like that at all obviously.”

Blair’s comments come just as the House of Lords voted to pass an Equality Act forbidding discrimination on the basis of sexual orientation, a measure that the Catholic Church has been up in arms about because, they said, the laws would require them to go against their religious beliefs in providing adoption services to same-sex couples.