David James, a 15-year veteran of British football, penned an editorial in The Observer over the weekend wondering if a gay football player would ever come out of the closet, and encouraging gay players to do so. 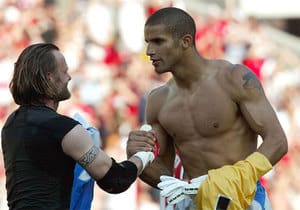 Said James (right), who donated his fee for the article to gay rights group Stonewall: “A senior executive in football said to me he wished all the gay footballers would come out so we could just get on with it. I find that view refreshing. In marketing terms they could make a fortune. Just imagine, football’s first gay couple playing for rival teams, arguing about offside decisions over the dinner table. They would do Hello! magazine, chatshows, advertisements. Would it upset players being naked in the changing room together? What about the after-hours highly homoerotic activities – indulging in football threesomes and roastings? Would football culture ever be the same again?”

James’ editorial prompted a response from Stonewall, whose director of parliamentary and public affairs, Alan Wardle said: “While we would welcome a Premier club footballer coming out, it is unlikely until the whole culture of the game changes and that means leadership from the top in particular from the FA. Gay people need to be supported wherever they are in the workplace and in football that support is sadly lacking.”

A spokesman for the Football Association disputed Wardle’s claims: “To suggest that the FA are not going anything would be unfair. What we are trying to do is to create an environment whereby homophobia is treated in the same way as racism, or any other form of discrimination.”

As far as his personal experience goes, James added: “No one’s ever come out to me during my 18 years in football. But I must say I’ve seen and heard some strange things, remarks that could suggest someone is gay or bisexual. I’ve heard drunken footballers egging each other on to do certain things for a certain amount of money. Maybe it’s routine stuff, part and parcel of what goes on in every pub team across the country, but it made me wonder why they would be talking about it if they were straight.”

Will a gay footballer ever come out of the comfort zone? [the observer]