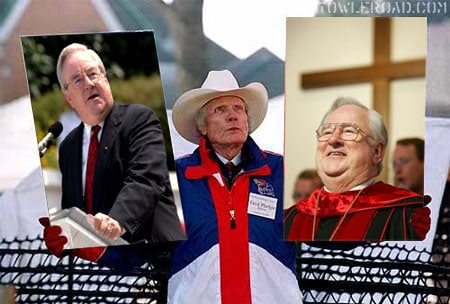 The haters can’t even stand each other.

Fred Phelps’ Westboro Baptist Church has announced plans to picket the funeral of Reverend Jerry Falwell. They say: “WBC will preach at the memorial service of the corpulent false prophet Jerry Falwell, who spent his entire life prophesying lies and false doctrines like ‘God loves everyone’. There is little doubt that Falwell split Hell wide open the instant he died. The evidence is compelling, overwhelming, and irrefragable.”

“1. Falwell was a true Calvinistic Baptist when he was a young preacher in Springfield, Missouri, and sold his soul to Free-Willism (Arminianism) for lucre.

2. Falwell bitterly and viciously attacked WBC because of WBC’s faithful Bible preaching — thereby committing the unpardonable sin — otherwise known as the sin against the Holy Ghost.