Dozens of couples from New York who traveled to Massachusetts to marry there between May 17, 2004 and July 6, 2006 can be considered legally married in both Massachusetts and in New York, according to a Massachusetts judge, because during that time period, New York’s laws did not explicitly ban gay marriage. 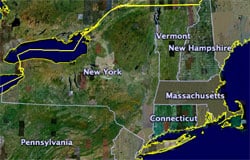 The 1913 law championed by Mitt Romney that forbids out-of-state same-sex-couples from marrying in Massachusetts if the marriages are not recognized in their home state therefore does not apply to more than 170 couples from the Empire State who married during that time period.

According to the New York Times, “Those marriages are also expected to be considered legal in New York. John Milgrim, a spokesman for the office of that state’s attorney general, said, ‘Since 2004 it has been the position of the attorney general’s office that New York law presumptively requires the recognition of marriages validly performed in other jurisdictions.'”