Arkansas’ most gay-friendly resort destination, Eureka Springs, will next week begin recording same-sex unions and issuing certificates in recognition. The certificates offer few new rights beyond recognition but could assist domestic partners seeking health insurance benefits. Of course, the religious right folk are up in arms: 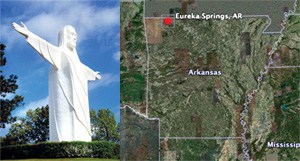 “The Reverend Philip Wilson, pastor of the First Christian Church, says he thinks the new service by the city is at odds with the town’s image as a Victorian village. He has taken out newspaper ads expressing his concerns that recording same-sex unions will make Eureka Springs, as he put it, ‘a homosexual Mecca.’ The city council voted unanimously last month to set up the registry of unorthodox unions. The certificates will be issued to any pair over 18 years of age who pay a $35 fee. Mayor Dani Wilson — no relation to the preacher of the same last name — said she’s gotten tons of e-mails wondering when the registry would be open for business.”

The town is apparently a popular wedding destination, kind of like the Bible Belt’s own Niagara Falls. Folks come to get married under the Christs of the Ozarks statue.