Those who don’t read Armistead Maupin may have no idea who Michael Tolliver is, but those who do may be thrilled that a new story in the saga of “Mouse” has arrived on bookstore shelves.

Maupin told the San Francisco Chronicle, which originally serialized the Tales series beginning way back in 1976, that he was initially scared of his approach: “I was nervous that people following the series might be thrown off by a first-person novel that has all the characters treated equally.”

He says that the main themes of the book deal with getting older:

“I wanted to illuminate the process of growing older as a gay man, and make it easier for people who think life is over. Gay men who are growing old are incredibly lucky to be here….if I’d known that 63 was going to feel this good, I would have been a lot more cheerful along the way. Age is the last closet you come out of in the gay world. There are such gloomy visions of gay men aging. But if you worship beauty above all else, if you worship sex above all else, you’re in trouble. If you’re not working on your heart every second, you are going to have a very sad old age.” 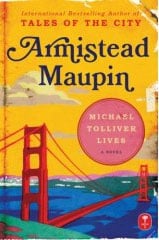 Maupin lives with his partner Christopher Turner who is 27 years his junior. The age difference is a fact that doesn’t phase Maupin in the least, he told afterElton last August:

“I think [aging is] the central issue of our generation. There are a lot of people out there who are trying to figure out how to be good old gay people — how to do it well, how to be the best you can for your age. In my case that has to do with trying to be the best version of 62 I can imagine. Not to try and recreate something I felt I had 30 years ago. Interestingly enough, my partner, Christopher, runs a personals website for men over 40. I actually met him on the site. I saw this handsome 34-year-old there that made my heart beat faster. I bumped into him in the street a few months later and asked him for a date.”

You may have missed…
Armistead Maupin: How to Live Well at any Age [tr]