Colombia’s lower house of Congress approved a gay union bill by a vote of 62 to 43 last Thursday. The bill would offer same-sex couples rights equal to heterosexual married couples in the areas of health insurance, social security and inheritance benefits. 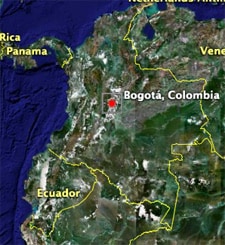 According to the Washington Post, “Colombia, like most Latin American countries, does not have fundamentalist groups with the kind of influence and funding to launch a national campaign against gay rights. But it does have a powerful Catholic Church, which argued that extending rights to same-sex couples would violate church doctrine. ‘This gives legal sanctity to families that are artificial and false,’ said José Galat, a prominent Catholic activist. After a long public battle, advocates from groups such as Diverse Colombia slowly won over many lawmakers in Congress. Among those who support the bill is President Álvaro Uribe, a conservative Catholic. He is expected to sign the measure.”

Said Marcela Sanchez, director of gay rights group Colombia Diversa: “It validates our union before the law so we no longer have to go around lying about our relationship.”