At a campaign stop at Concord High School in New Hampshire yesterday, Mitt Romney was confronted by Cynthia Fish, a lesbian with two children, about his views on family and marriage.

According to the Concord Monitor, “The confrontation came just after Romney explained that he viewed marriage as ‘primarily an institution for the development and nurture of children.’ While he said he wouldn’t prevent gay couples from entering spousal contracts if they choose to live together, ‘the government benefits of marriage I’d reserve for a man and a woman.'” 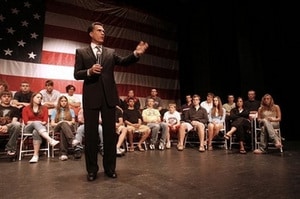 Said Fish: “I am a gay woman and I have children. Your comment that you just made, it sort of invalidates my family…I wish you could explain to me more, why if we are sending our troops over to fight for liberty and justice for all throughout this country, why not for me? Why not for my family?”

“Wonderful. I’m delighted that you have a family and you’re happy with your family. That’s the American way. … People can live their lives as they choose and children can be a great source of joy, as you know. And I welcome that…Marriage is an institution which is designed to bring a man and woman together to raise a child and that the ideal setting for society at large is where there is a male and a female are associated with the development and nurturing a child…There are other ways to raise kids that’s fine: single moms, grandparents raising kids, gay couples raising kids. That’s the American way, to have people have their freedom of choice.”

And added, according to the Monitor, “That’s not to say these other forms aren’t valid. But, for instance, we don’t say a single person is married, even if they are raising children,” Romney said. “I believe, in society, we want to bring a man and woman together.”