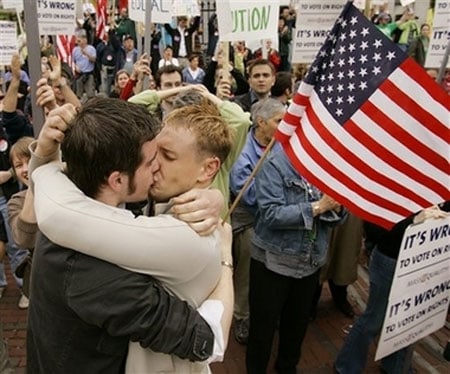 He describes the moments after the vote like this: “Over in four minutes. The building is shaking with thousands yelling to the legislators as they gather in Nurses’ Hall: ‘THANK YOU! THANK YOU!’ Senate president Therese Murray is the first to address the crowd to shouts of, ‘We LOVE Terry Murray!’ Hundreds shouting, cheering, crying tears of joy. David Wilson, one of the original plaintiff couples is here hugging everyone…Governor Deval Patrick is now addressing the crowd, or trying to. The crowd is going wild. ‘Thank you, Deval!’ ‘Today the freedom to marry is secure,’ he begins, to wild cheering.”

Scenes outside the statehouse.

For (left) and against (right). 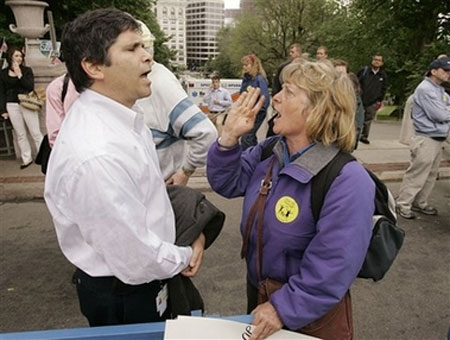 This woman, Diane Steele of Richmond, Mass., was arrested by police. Following the vote, she reportedly slapped gay rights supporter Jack Kirschenbaun (above), of Malden, Mass. as they argued their positions. Buh-bye. 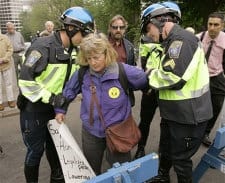 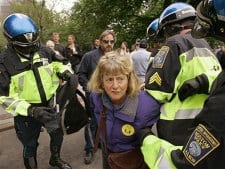 Here’s a video from TakeMassAction showing the Religious Coalition for the Freedom to Marry after they left their interfaith service and arrived at the statehouse to join pro-equality demonstrators.

Finally, I encourage everyone to read this op-ed by Representative Gale Candaras, a Democrat from Wilbraham, who voted for the proposed amendment back in January but changed her mind this time. It’s a powerful piece which reveals how hearts and minds can be changed through education, experience, tolerance, and understanding.

Here’s a bit of it: “I know from listening to my constituents, since I first became Senator this year that this vote, the vote I take today, is the right vote for the people I serve. I have been most impressed by the number of individuals who have called me and asked me to change my vote because they have changed their minds. One grandmother told me she had changed her mind and wanted me to change my vote in case one of her grandchildren grew up to be gay or lesbian. She did not want any of her grandchildren to be denied the right to marry the person they love. This is exactly the legacy we will leave to generations beyond us, and the example we can set for the nation and, I daresay the world, which is certainly paying attention to what we do and say here today.”

Thank you Ms. Canderas, for approaching the issue with an open heart and mind. And Governor Deval Patrick and all the others who worked hard to defeat the bigoted piece of legislation. All in all, a fantastic day in Massachusetts.