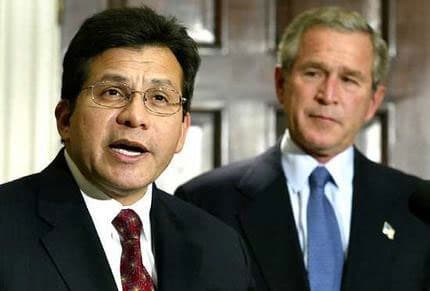 After months of controversy over the firing of U.S. Attorneys and his testimony regarding the NSA’s terrorist surveillance programs, as well as accusations of perjury by congressional Democrats, Attorney General Alberto Gonzales has reportedly resigned. An announcement is forthcoming later this morning, according to reports.

According to the New York Times: “Mr. Gonzales, who had rebuffed calls for his resignation, submitted his to President Bush by telephone on Friday, the official said. His decision was not announced immediately announced, the official added, until after the president invited him and his wife to lunch at his ranch near here. Mr. Bush has not yet chosen a replacement but will not leave the position open long, the official said, speaking on condition of anonymity because the resignation had not yet been made public.”

U.S. News is saying that Homeland Security Secretary Michael Chertoff will replace Gonzales: “Officials say he’s got fans on Capitol Hill, is untouched by the Justice prosecutor scandal, and has more experience than Gonzales did, having served as a federal judge and assistant attorney general.”

Cnn is reporting that Chertoff is to be replaced by Bush loyalist Clay Johnson III, the Deputy Director for Management at the Office of Management and Budget.