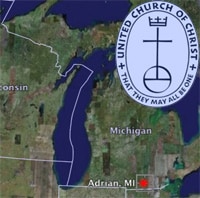 “Brotherhood Mutual Insurance Company, based in Fort Wayne, Ind., told West Adrian United Church of Christ in Adrian, Mich., that its denomination’s gay-affirming stances made it a ‘higher risk’ for property and liability insurance. ‘Our company’s decision to not submit a quote to your organization arose out of information that was supplied in a supplemental application, indicating that your organization ‘publicly endorses or practices the marriage of same-sex couples’ and ‘publicly endorses or practices the ordination of the homosexual clergy,” wrote Marci J. Fretz, a regional underwriter for Brotherhood Mutual, in a July 30 letter to the church. Ironically, the church was fully insured by another company, and happily so, but was sought out by a local agent of Brotherhood Mutual who asked to provide the church a quote and then, subsequently, refused to do so.”

You may remember, United Church of Christ produced the much-publicized “Ejector Seat” and “Bouncer” ads promoting their openness to accepting people of all races and sexual orientations to their denomination.