Mitt Romney has seized on a question to candidates at last night’s Democratic debate, which asked whether they would approve of their second-grader being read a book (I believe they were referring to the book King & King but the moderator referred to one in which a “prince…marries another prince”) which preaches tolerance about same-sex marriage. 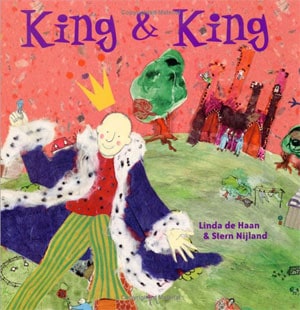 Said Romney in a press release today: “Last night’s debate was just the latest example of how out of touch the Democratic presidential candidates are with the American people. Not one candidate was uncomfortable with young children learning about same-sex marriage in the second grade. This is a subject that should be left to parents, not public school teachers. We need to strengthen our families by passing a federal marriage amendment and also insisting on marriage before having children. Change in Washington requires Democrats with the courage to stand-up to their ultra liberal base and do what’s right for our children.”

Here are transcripts of the Dems answers, according to the Romney website.

Edwards answered the question: “Yes, absolutely. What I want is I want my children to understand everything about the difficulties that gay and lesbian couples are faced with every day, the discrimination that they’re faced with every single day of their lives. And I suspect my two younger children – Emma Claire, who’s nine, and Jack, who’s seven — will reach the same conclusion that my daughter, Cate, who’s 25, has reached, which is she doesn’t understand why her dad is not in favor of same-sex marriage, and she says her generation will be the generation that brings about the great change in America on that issue. So I don’t want to make that decision on behalf of my children. I want my children to be able to make that decision on behalf of themselves, and I want them to be exposed to all the information, even in – did you say second grade? Second grade might be a little tough, but even in second grade to be exposed to all – to all of those possibilities because I don’t want to impose my view. Nobody made me God. I don’t get to decide on behalf of my family or my children, as my wife, Elizabeth, who’s spoken her own mind on this issue. I don’t get to impose on them what it is that I believe is right…”

Obama answered: “You know, I feel very similar to John: that – you know, the fact is, my 9-year-old and my 6-year-old’s – I think, are already aware that there are same-sex couples. And my wife and I have talked about it. And one of the things I want to communicate to my children is not to be afraid of people who are different, and because there have been times in our history where I was considered different, or Bill Richardson was considered different. And one of the things I think the next president has to do is to stop fanning people’s fears….”

And Clinton used a bit more caution: “Well, I – I really respect what both John and Barack said. I think that we’ve seen differences used for divisive purposes, for political purposes in the last several elections, and I think every one of us on this stage are really personally opposed to that and will do everything we can to prevent it. With respect to your individual children, that is such a matter of parental discretion. I think that obviously it is better to try to work with your children, to help your children the many differences that are in the world and to really respect other people and the choices that other people make, and that goes far beyond sexual orientation.”

You may have missed…
King & King: Once Upon a Time in Massachusetts [tr]