Quethlie Alexis and Nadine Alexie, two nannies for the late Anna Nicole Smith, say they never spoke with Rita Cosby, who claims that the nannies told her that Anna Nicole liked to watch a video of Larry Birkhead and Howard K. Stern having sex with one another. 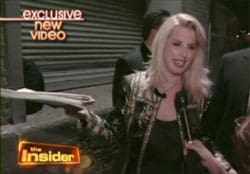 Said Cosby, who was served with a $60 million libel lawsuit by Stern at her book party last week: “We have a number of sources. We have it attributed directly to a private investigator who specifically said that.”

According to the New York Daily News, “The nannies said they spoke with a private investigator who they believed worked for an attorney for Smith’s mother. But they never mentioned any alleged encounter between Birkhead and Stern.”