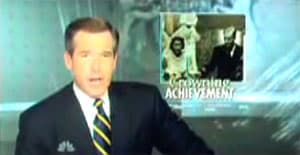 Wrote Williams: “I was the recipient today of several emails from well-intentioned people, telling me I was being attacked in parts of the blogosphere for something I wrote and said on the air in last night’s broadcast. It was a closing piece about Queen Elizabeth and Prince Phillip celebrating their 60th anniversary. I noted this accomplishment, especially in this era when, as I put it, marriage seems ‘under attack’ as an institution. My meaning? Our national divorce rate, which is currently somewhere between 40 and 50 percent. Others took it upon themselves to decide that I was somehow attacking gay marriage. The simple fact is that nothing could have been further from my mind, as many others easily understood. In fact, one comment shared with me today came from a respected member of the National Lesbian and Gay Journalists Association, who said, ‘It seemed to me he was talking about the sky-high heterosexual divorce rates. Marriage IS under attack — by straight people. It had nothing to do with the gay marriage movement.'”

While Williams’ perspective is certainly understandable, in a time when gays and lesbians are accused of attacking the institution by right-wingers and presidential candidates on a daily basis, anyone can see why there might be confusion about his rhetoric. It was right of him to clarify, but perhaps the perspective of a different segment of the population might enter his thought process the next time the topic comes up.

you may have missed…
Brian Williams: “Marriage is Under Attack” [tr]