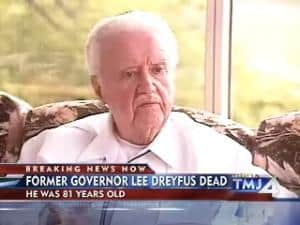 Dreyfus, who was elected in 1978 after serving on the faculty and as chancellor at University of Wisconsin Stevens Point, signed the nation’s first statewide gay rights law in 1982.

According to the AP, “The gay rights measure Dreyfus signed made it illegal to discriminate on the basis of sexual orientation in housing, employment and public accommodations.” They add, “Dreyfus also was a vocal opponent of the state’s ban on gay marriage and civil unions, which was approved by voters in 2006.”

Said Glenn Carlson, interim executive director of Fair Wisconsin: “[Dreyfus’ actions] really established Wisconsin in the forefront of nondiscrimination. He’s been a great leader and will be sorely missed.”

Added Governor Jim Doyle, who ordered flags to be flown at half mast today: “Lee Dreyfus was one of a kind – one of Wisconsin’s unique personalities.He was both a wonderful governor and education leader. He led us, educated us, entertained us, all at the same time.”