A recent poll by the Baltimore Sun revealed that a majority of voters in Maryland support some sort of legalized same-sex union. Lawmakers today are planning to introduce a related bill today, WBAL reports: 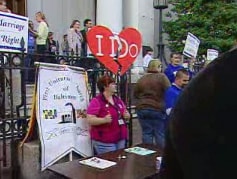 “Sponsors said the bills will repeal current gender definitions in state marriage laws, allowing same-sex couples to marry. But the bill will include a caveat that no religious officials will be required to conduct or even recognize the unions. Sponsors said they have more than 50 sponsors in the House and Senate on the bill. But many lawmakers — and Gov. Martin O’Malley — have indicated no interest in taking up a gay marriage bill this year. Several Republicans plan to sponsor a rival proposal in coming days to amend the state constitution to define marriage as only between a man and a woman.”