After a gay Connecticut couple was told by tax preparer H&R Block that “We don’t support Connecticut civil union returns,” the ACLU has stepped in to demand they change their policies: 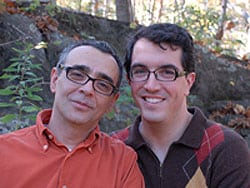 “Through its website, the company said the couple would have to work with one of their professionals, by phone or at one of their office locations, which would be more time consuming and substantially more expensive. ‘This is yet another example of the many ways that civil unions just don’t live up to marriage,’ said Jason Smith (right) of Hartford, who has been with his partner Settimio Pisu for six years. ‘It really stung when I realized it would cost an additional $150 dollars to have our tax returns prepared. We’re saving for a house and hoping to start a family, so every penny counts right now.’ According to the letter the ACLU sent to H&R Block, failing to provide gay couples with civil unions the option of filing their taxes online as it does for married couples is in violation of a state law that bars discrimination based on sexual orientation and civil union status. The letter demands that the company adapt its website to accommodate couples with civil unions and to reimburse all couples who were forced to pay the additional charges due to H&R Block’s discriminatory practices.”

As if tax time needed to be any more fun.