The Huffington Post’s Ryan Davis, who with a coalition of gay leaders in late March flew to California to lobby Schwarzenegger to oppose the Family Research Council’s anti-gay marriage ballot initiative, has heard some rumblings from within the California High Court. Schwarzenegger publicly opposed the measure that would ban same-sex marriage at the Log Cabin Republican convention over the weekend, and Davis believes it’s because he knows what may happen next month. 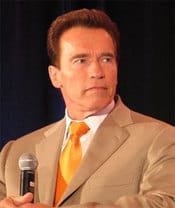 Writes Davis: “Sources wishing to remain anonymous in the California Court System indicate that the court, which has until June 2, 2008 to issue it’s marriage ruling, is considering issuing it on Friday, May 23, 2008, with the decision being written by Chief Justice Ronald George. The Court is readying itself for a backlash that may follow the rumored and bold decision. There is talk that the Court will not simply strike down Proposition 22, but will move the State of California toward full marriage, if not even granting full marriage rights for gays and lesbians outright. Obviously aware of what’s coming, Gov. Schwarzenegger came out swinging against the FRC’s proposed amendment, ‘I will always be there to fight against that,’ he said to huge applause this weekend at a Log Cabin Republican Convention in San Diego. He went so far as to call the initiative a ‘waste of time'” and acknowledge that the people of California are, ‘much further along on that issue.’ The latest Field Poll shows only 51% of Californians oppose full gay marriage, an 11 point drop since 2000. There seems little doubt that California is moving toward full gay marriage equality.”

A seismic prediction, to be sure. We can hope.