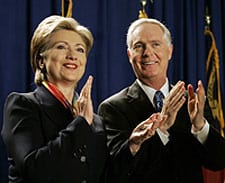 The Smoking Gun notes: “Easley’s compliment, as it were, may offend some voters since the word ‘pansy’ is often used in a derogative fashion to describe a male homosexual. Or at least that’s what it says in the Webster’s New Collegiate Dictionary on our shelf (we scanned the ‘pansy’ entry from page 828 and posted it below). Other dictionaries (Oxford, Cambridge, and Dictionary.com) offer a similar definition for ‘pansy,’ describing it as a ‘disparaging’ or ‘derogatory’ term for an ‘effeminate or homosexual man.'”

The remark has already begun to reverberate across the blogosphere. More from ABC.

Watch Easley’s remarks, which I’ve clipped, AFTER THE JUMP…