Supporters and opponents of a proposed amendment banning same-sex marriage in Pennsylvania turned out for a hearing on Thursday. 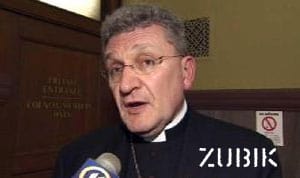 “I come to you today as a pastor, a pastor with a desire to testify on behalf of one of the oldest institutions of humanity — marriage itself. At a time when we should be engaged in doing all we can to strengthen the family, we are facing cultural forces that want to so water down the definition of marriage that it could apply to any human relationship, or to no relationship at all.”

He tempered his remarks with a call for tolerance: “Church teaching regarding the dignity of homosexual persons is clear. They must be accepted with respect, compassion and sensitivity.”

Added Zubik to local media later: “I felt it was very important for me to come here today. God really has defined marriage as it is. It’s part of natural law. It’s the fabric of society. And I think what’s so important about it is that – we talk about marriage we also have to connect that very intimately into what the family is about.”

Plenty of opponents were on hand to counter the Bishop, however: “Standing in front of the Pittsburgh City Council chamber with a number of vocal opponents of the amendment, state Rep. Dan Frankel, D-Squirrel Hill, yesterday vowed to fight the bill every step of the way. ‘Assuming it even makes it out of the Senate, I will fight to make sure it doesn’t see the light of day,’ he said.”