North London’s Newington Green Unitarian Church is standing up for same-sex couples by refusing to conduct any heterosexual marriages until the Civil Partnership Act is changed to allow religious content in civil partnership registrations. The church’s committee voted unanimously to do so: 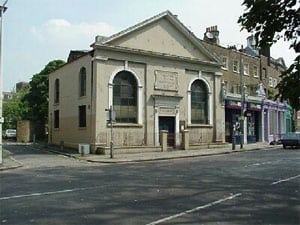 “The church in Islington suspended full wedding ceremonies from 30 March. The church describes itself as ‘an inclusive, liberal religious community welcoming people from all traditions and perspectives’. It said it would continue to bar full weddings until the law was amended. [Minister Andrew] Pakula said: ‘When we realised the extent of the injustice in the existing civil partnership law which completely prohibits any connection between religion and civil partnerships, we decided it just wasn’t something we could take part in. We have at this point continued to do blessings and civil partnership blessings so anyone who has done the legal business in the town hall can come to us and do a gorgeous religious celebration…Historically churches have been major perpetrators of injustice for gay and lesbian people and as a church that welcomes people of all sexual orientation, as both members and clergy, we feel it is our duty to stand up on the other side. We are standing on the side of love here and that is our stance.'”