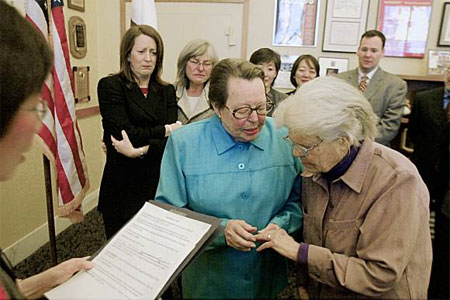 At 5:01pm today, history will be made as gay and lesbian couples begin marrying in California, led symbolically by the marriage of Del Martin and Phyllis Lyon, the couple of 50 years who were first married in San Francisco City Hall in 2004 (above). I’ve rounded up some of the significant reporting here.

Profiles of some of the key figures in the same-sex marriage struggle (both for and against) including Del Martin and Phyllis Lyon, Hillary and Julie Goodridge, Gavin Newsom, and Ronald George. 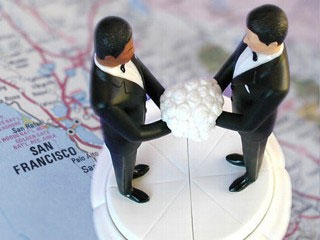 A new CBS poll shows reveals America’s shifting views on same-sex marriage: “Twenty-eight percent think same-sex couples should be permitted to form civil unions, but more than a third – 36 percent – say there should be no legal recognition of a gay couple’s relationship. Last month, the California Supreme Court struck down that state’s ban on same-sex marriage, paving the way for gay and lesbian couples to marry there. Americans’ views on this issue have changed since 2004, although opinion has not changed substantially in the last two years. In November of 2004 (soon after the presidential election) just 21 percent of Americans supported the idea of same-sex couples being allowed to marry.”

A California business specializing in interchangeable figures for wedding cakes is seeing a windfall. More on the business boom, below.

What churches are participating? “Episcopalians, Unitarian Universalists, rabbis, a Methodist and even a Catholic priest are planning to bless some same-sex marriages when they are set to become legal in California on Monday. ‘I believe the family is a cornerstone for a strong society, and I’m all in favor of everything we can do to build up the values that make strong families,’ said the Rev. Susan Russell of All Saints Episcopal Church in Pasadena, which has been blessing same-sex unions for 16 years. ‘I think the values matter more than the gender of the people making up the heads of those families,’ Russell said.” NPR reports on the coming clash between equal rights and religious expression.

Some couples don’t plan on rushing to the altar: “As of yesterday, more than 700 same-sex couples had made appointments to get a marriage license in San Diego County, including 190 for Tuesday. Michael Kimmel, a Kensington psychotherapist who counsels gay couples, said the pressure to wed is prompting some couples to re-evaluate the strength of their relationships.”

The NYT notes that couples may be wise to look to examples in Massachusetts. 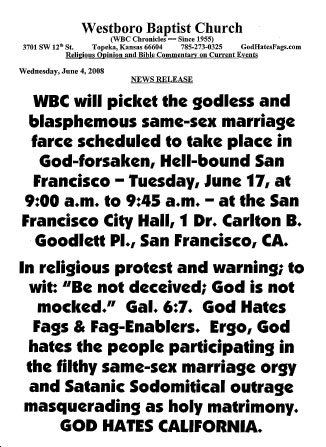 And don’t think that Fred Phelps’ Westboro Baptist Church is going to miss out on the action.

The San Francisco Chronicle visits the town where the highest percentage of residents (83%) voted for Proposition 22, the successful state ballot initiative that limited marriage to a man and a woman, and gets its take on the same-sex marriage laws: “Most residents still don’t like the idea of allowing men to marry men and women to marry women. Some residents say they don’t know any openly gay people, and others have trouble even saying the word ‘gay.’ One man called it being ‘of the homosexual persuasion.'”

California businesses are poised to receive a windfall: “Faced with a wilted economy, water shortages and sticker shock at the gasoline pump, many California businesses are welcoming ‘the dinks’ (double income, no kids) with open arms. ‘It’s basically a godsend,’ said Daniel Doiron, the general manager of the Ingleside Inn in Palm Springs, which is offering honeymoon specials from $479 bargain basement (boutonnieres, 15-minute wedding, 20 guests) to the ‘Elizabeth Taylor’ at $29,999 (poolside villas, wedding cake and reception, ice sculptures, flowers, sit-down dinner for 200 and three nights in the honeymoon suite). ‘We’re just blessed to help.’ Ten couples from New York, Las Vegas and Phoenix have signed up for the options.”

An AP report on same-sex marriage, AFTER THE JUMP…

Previous Post: « Gay Cubans Mark their Territory Outside of Havana
Next Post: The First Same-Sex Couple to Marry in L.A. »