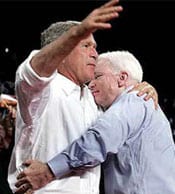 Not that this is a huge news flash or anything, but the Protect Marriage Campaign, who are sponsoring the ballot initiative to place a constitutional ban on same-sex marriage before California voters in November, said yesterday that they had received an email from John McCain backing their cause.

Said McCain’s email: “I support the efforts of the people of California to recognize marriage as a unique institution between a man and a woman, just as we did in my home state of Arizona. I do not believe judges should be making these decisions.”

McCain is for “pretend weddings” however!

Watch that clip, AFTER THE JUMP…