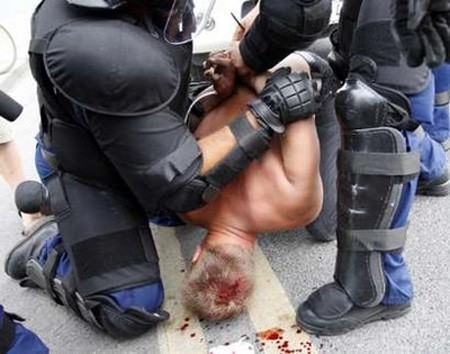 At least 49 arrests were made and 10 people injured on Saturday during a gay pride march in Budapest, Hungary as nationalists and neo-Nazis attacked marchers and riot police who had assembled to quell the anticipated violence.

According to the Budapest Times, “Far right activists had been called to arms weeks in advance via extremist websites, and a massive police presence was in place to keep the expected angry protesters away from the gay marchers. Two-metre-high metal barricades had been erected along both sides of Andrassy út to keep agitators out of the path of the parade. The participants in the parade – well over a thousand members of gay, lesbian and transsexual groups, as well as sympathisers – were fully expecting the attacks. They wore plastic raincoats and carried multi-coloured umbrellas as eggs, tomatoes and other missiles rained down on them. Rioters turned on the police at a number of locations. Shortly after 4pm, the police had to disperse gangs armed with groceries, bottles and stones as they attempted to intercept the gay marchers at Oktogon. A police van was set ablaze in the melée, and tear gas and water cannon were used to clear the way for the parade. Cordons were set up to prevent people from approaching Andrássy út from side streets.” 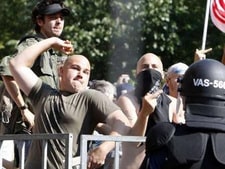 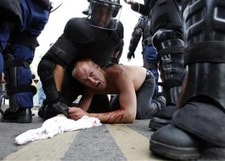 Bloomberg reports: “Parade-goers carried rainbow-colored umbrellas and signs carrying slogans such as ‘Jesus taught us to love. Why do you hate?’ The truck at the head of the parade carried two men who acted out a mock marriage with a female officiant. Their black suits became caked with egg yolks as the parade progressed. Gabor Szetey, a former state secretary in Prime Minister Ferenc Gyurcsany’s cabinet who announced he was gay one year ago, said Gay Pride Day was no different from Hungarian Pride Day in an address to parade participants. ‘Hungary, which is a European democracy, must accept people who are different,’ he said. ‘We can’t choose whether we are gay, Roma or Jewish, but we can control our own destinies.’

A video report from the BBC, AFTER THE JUMP… 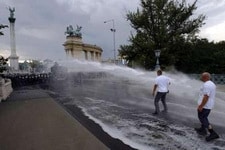