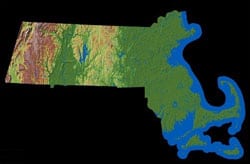 Due to a technical change made by the House, same-sex couples from out-of-state will not have to wait the standard 90 days before the repeal of the law takes effect. They will be able to be married immediately after Governor Deval Patrick signs the bill:

“The measure has moved to the Senate for its final approval. Aides say Gov. Deval Patrick may sign it into law as early as Thursday.”