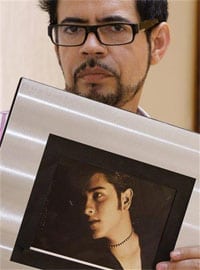 “Saavedra’s moment of truth came in the middle of an impassioned speech to 5,000 people at the International AIDS Conference about the paltry amount of money being spent to stop the spread of AIDS among gay men, when he said publicly for the first time that he was gay. As he held up a photo of himself with his partner, the crowd applauded wildly. Afterward, men from Africa and India congratulated him with tears in their eyes. ‘They told me that I was a hero, and that they wished they could do the same in their countries,’ said Saavedra, who is infected with HIV and also heads the AIDS prevention program in a country where many gay men live in denial.”