Congressman Barney Frank told the AP today that Sarah Palin’s family life is fair game, reports the Boston Herald: “[Republicans are] the ones that made an issue of her family…Apparently she’s a great favorite with the conservative social movement. They have said that it’s liberalism and liberals who have undermined families — same-sex marriage has been a problem, they don’t want gay people to adopt … This helps undercut those arguments.” 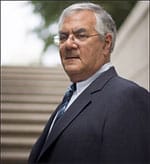 The Herald continues, “Revelations about Palin’s 17-year-old daughter’s out-of-wedlock pregnancy and other family troubles reflect the stresses and strains of modern everyday life more than anything else, said Frank. ‘Well, hers is a family in great turmoil,’ added Frank. ‘She fired the state police commissioner because he wouldn’t fire her sister’s ex-husband. She has a daughter who became pregnant. That’s not her fault.’ The Alaska governor faces accusations of firing public safety commissioner Walt Monegan because he would not fire her former brother-in-law as a state trooper, in what amounts to a messy Palin family drama dating to her pre-gubernatorial days.”

For our interview with Barney Frank at the Democratic National Convention, click here.

You may have missed…
Document Reveals Sarah Palin’s Anti-Gay Record [tr]
Sarah Palin: Experience vs Pregnancy vs the Female Vote vs the GOP [tr]