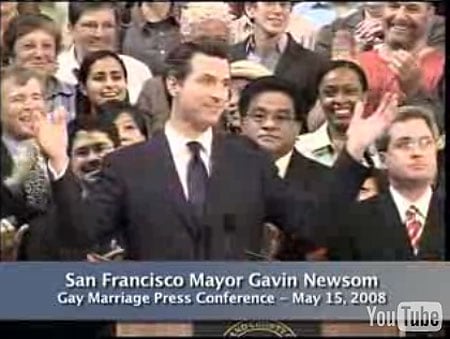 Backers of Proposition 8, the measure that would ban same-sex marriage in California, have bought $10 million worth of airtime to broadcast this new ad featuring San Francisco Mayor Gavin Newsom announcing, “It is going to happen now, whether you like it or not.” It’s Newsom’s speech on the day that the California Supreme Court legalized same-sex marriage in the state.

In contrast, opponents of Proposition 8 began broadcasting an ad last week with a much gentler tone.

“Their ad claims that the California Supreme Court “mandated” the right to marry for same-sex couples and, as a result, school children will be taught about same-sex marriage unless Prop 8 passes. Of course it’s a blatant lie. What the Court did was uphold the Constitution’s promise of equality. And the proponents know that their claim that the law requires that children be taught about same-sex marriage in school is also a lie, just like the other false claims in their misleading ad. But honesty clearly is not a value that the proponents of Prop 8 believe in.”