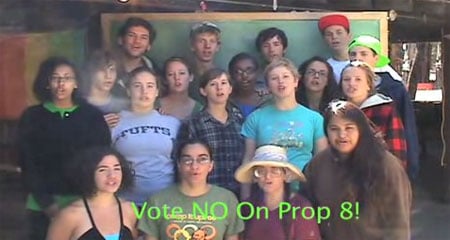 Proud Parenting has produced a video using mostly kids with gay parents that puts a human face on some who will be affected by the same-sex marriage ban should it pass in California.

In related news, some are concerned that Black voters in California, traditionally conservative on social issues, will come to the polls in great numbers to support Obama and then cast a vote for the anti-gay measure:

“To blunt that possibility, gay leaders and Proposition 8 opponents have been sponsoring casual events at restaurants in traditionally black neighborhoods in Los Angeles, meeting with black clergy members and recruiting gay black couples to serve as spokespeople on panels and at house parties and church events. ‘This is black people talking to black people,’ said Ron Buckmire, the board president of the Barbara Jordan/Bayard Rustin Coalition, a gay rights group in Los Angeles. ‘We’re saying, ‘Gay people are black and black people are gay. And if you are voting conservative on an antigay ballot measure, you are hurting the black community.’'”

Watch the Proud Parenting video, AFTER THE JUMP…