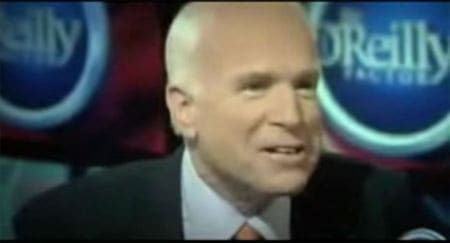 A new ad from TruthandHope.org that nails McCain on his associations with lobbyists and Bush.

In related news, Think Progress reports on the McCain campaign’s ties to lobbyists at the center of the current Wall Street bailout:

“A major player in this effort is the Financial Services Roundtable, a “lobbying group representing the nation’s banks” with significant ties to Sen. John McCain’s (R-AZ) presidential campaign. According to a MotherJones report, current and former lobbyists for the Roundtable that have worked or fundraised for McCain’s campaign include: ormer Rep. Susan Molinari…Carlos Bonilla…David Crane…Samuel Geduldig… and Former Sen. Phil Gramm.”

Watch the Truth and Hope spot, AFTER THE JUMP…

Previous Post: « Pop Singer Will Young: ‘I’m the Worst Gay Person Ever’
Next Post: UK’s ‘Bottle Banksy’ Strikes When the Milk is Out »