This one threw me for a loop. The NY Observer tracked feminist lesbian tennis icon Billie Jean King down at Cipriani recently and asked her what she thought of the media’s treatment of Sarah Palin… 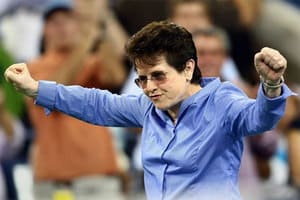 The Observer continued: “But would the Governor of Alaska have been so quick to release public statements about her family if her daughter Bristol was revealed to be gay, instead of pregnant? ‘That was one question I had in my mind,’ said Ms. King, who was first prominent professional female athlete to come out. ‘I have no idea. Her, I think she’d embrace the child and then have to start thinking about the issue.'”

Because all that “thinking” about their lesbian daughter really affected policy in the Bush/Cheney White House, right?

Previous Post: « New Obama Ad Calls McCain Out on ‘Maverick’ Claim, Lies
Next Post: David Archuleta Has a Crush…on Someone »