Ellen DeGeneres has made an initial media buy of $100,000 to air a PSA she recorded earlier this week urging voters to vote ‘No’ on Proposition 8, the ballot measure that would ban same-sex marriage in the state, according to a press release from the ‘No on 8’ campaign. Said campaign director Patrick Guerriero: “In her desire to speak directly to the people of California, Ellen has stepped up as only Ellen can.” 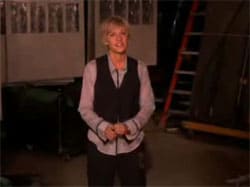 Says Ellen in the PSA: “Hi, I’m Ellen DeGeneres. I got to do something this year I never thought I’d ever be able to do: I got married. It was the happiest day of my life. There are people out there raising millions of dollars to try and take that right away from me. You’ve seen their ads on TV. They’re twisting the truth, and they’re trying to scare you. I believe in fairness. I believe in compassion. I believe in equality for all people. Proposition 8 does not. Please, please, vote no on Prop. 8.”

I posted it earlier, but you can watch it again, AFTER THE JUMP…

Express your opposition to Prop 8 by donating HERE.