This message regarding last night’s debate between Senator Joe Biden and Governor Sarah Palin arrived in our mailbox from Evan Wolfson, executive director of Freedom To Marry, the gay and non-gay partnership working to win marriage equality nationwide. I’m happy to republish it here.

As I’ve noted to some colleagues and reporters, analyzing last night’s exchange on same-sex couples and marriage: 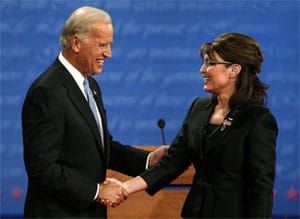 The good news is that Senator Biden expressed his belief that gay and non-gay couples should be treated equally under the law, and committed to support for the incidents of marriage, the legal protections and responsibilities that come with marriage. The bad news is that he stopped short of supporting actual equality through the freedom to marry itself, the only way to provide the full security, clarity, and protections that marriage alone brings, and failed (as did the moderator) to point out the inconsistencies and falsehoods in Governor Palin’s answer. His comments garbled the distinction between religious rites of marriage, properly left to religions to decide, and the legal right to marry, regulated by the government, which should not discriminate. Supporters of gay equality should not be using the anti-gay forces’ false talking-point (introduced by Governor Palin) that ending gay couples’ exclusion from marriage is “redefining” marriage; marriage is not “defined” by who is denied it.

The good news in Governor Palin’s answer was that she felt obliged to go out of her way to proclaim herself “tolerant of adults in America choosing their partners, choosing relationships that they deem best for themselves,” a position that, if true, raises the question of why the law should then discriminate against those Americans, whether in marriage or other legal mechanisms such as domestic partnership (which she opposed in Alaska and tried to overturn by constitutional amendment).

Her assertion of non-judgmental “tolerance” is inconsistent with her chuch’s hosting an anti-gay “change through prayer” program that she has refused to repudiate. And her claim that “not in a McCain-Palin administration, to do anything to prohibit, say, visitations in a hospital or contracts being signed, negotiated between parties” is at odds with Senator McCain’s support for anti-gay constitutional amendments such as the one in Arizona that would have impeded legal acknowledgment of gay couples and denied the range of protections, from marriage down to specific legal measures such as partnership recognition, to unmarried couples, gay and non-gay.

Overall, then, the bad news is that while one party’s positions are immensely better than the others, both candidates failed to support full equality for America’s gay families (despite Governor Palin’s invocation of “equal rights” as an American value in her closing); the worse news is that the real and immense difference between their actual positions — one supporting actual movement toward equality and fairness, the other offering bland assurances belied by actual policy positions deepening discrimination — may have gotten lost.

And, to end on a positive, it is good news that yet again we see that the discussion around marriage equality is moving politicians, sincerely or otherwise, to greater acknowledgment of gay families and the wrongness of discrimination against them. That one presidential ticket is indeed committed to specific legal measures to reduce discrimination and, indeed, tacit support for marriage equality, even if they won’t yet embrace or explain it, is perhaps best of all.