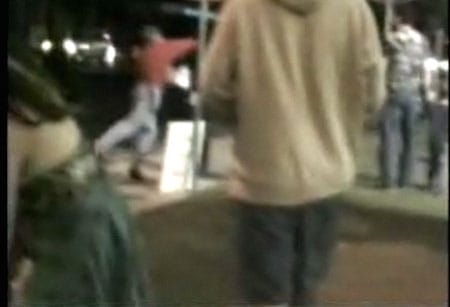 Kern High School District Trustee Ken Mettler was caught on video assaulting a “No on Prop 8” protestor on Friday night in Bakersfield, California. Mettler was reportedly snatching signs from the “No on 8” people before the assault occurred.

Neither Mettler nor the man he punched and kicked was arrested or charged. 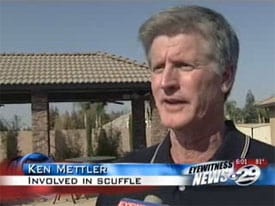 Bakersfield now reports: “The video shows Mettler taking signs which originally read “Yes on 8″ but were altered to read ‘No on 8’. Mettler is jeered by the crowd as he collects the signs. Mettler than starts walking toward a man, and the video shows Mettler grabbing a sign and then appearing to strike and kick 21-year-old Robert Badewitz. ‘He hit me on the left jaw with his fist and then he kicked me as well,’ said Badewitz. Mettler then walks away after the incident. Bakersfield Police say an assault did take place, but would not say if Mettler was the one who committed the assault. Police questioned Mettler but no arrests were made. Police say accusations were made signs were being stolen. Ken Mettler is also the Kern County chairman for Yes on Proposition 8, and president of the Bakersfield Chapter of the California Republican Assembly.”

Mettler claims the punch was in self-defense, though there is no evidence on the video. Says Mettler: “I was assaulted. A fellow threw a punch at me. He missed. And I did hit him.”

Watch video of the assault, AFTER THE JUMP…