If you missed the weekend update on the Prop 8 battle I posted yesterday, it’s here.

ABC News takes a close look at the minority vote, the religious vote, and the youth vote in the battle over same-sex marriage in California and Proposition 8 which are making it difficult to poll and even harder to predict: 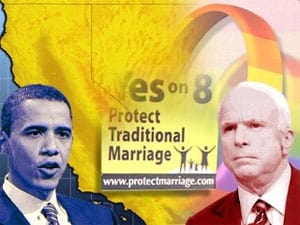 “African American parishes that argue scripture opposes same-sex marriage are joined by a broad coalition of traditional churches – from white evangelicals and Mormons to Latino and Chinese Christian parishes and even some orthodox Jews. The opposition includes gay and civil rights groups, unions, businesses and corporations, ethnic lobbies and Hollywood. But, in another twist to this complex issue, both the NAACP and the National Black Justice Coalition have broken with many African American parishes. The rival campaigns on Proposition 8 have been holding competing events at historically black churches in San Francisco, Oakland and Los Angeles in attempts to sway a critical bloc in a race that polls say is a toss-up. In a survey of 35,000 Americans about religious beliefs conducted by the Pew Forum on Religion and Public Life, 46 percent of those who attend historically African American churches believe that society should discourage homosexuality. But that group is far more accepting of gays and lesbians than white evangelicals or Mormons, who frown on them at rates of 64 and 68 percent respectively.”

Rev. Samuel Rodriguez, president of the National Hispanic Christian Leadership Conference, told ABC News that although Latinos are not necessarily “homophobes,” the white Evangelicals crusading against gay marriage missed an opportunity to engage them based on their religious beliefs: “If the proposition fails, it’s “a direct result of the power brokers not engaging the Hispanic community in the state of California and only in a token role, rather than sharing the leadership mantel.”

You can donate to the ‘No on Prop 8’ effort by CLICKING HERE.

In other news, Republicans Against 8 has produced two new spots in their grassroots campaign. They were directed by Milk scribe Dustin Lance Black. Republicans Against 8 campaign director Scott Schmidt told the Advocate: “This community has many, many talents that run beyond phone banking and fund-raising. [The effort is an example of the ]unprecedented cooperation in the gay community to beat Prop. 8. I am a Republican, Lance Black isn’t one. … It doesn’t matter who you are — Democrat, Republican, Trojan, Bruin — we want to work together to accomplish the same goal.”

Watch their spots, AFTER THE JUMP…

You can donate to the ‘No on Prop 8’ effort by CLICKING HERE.