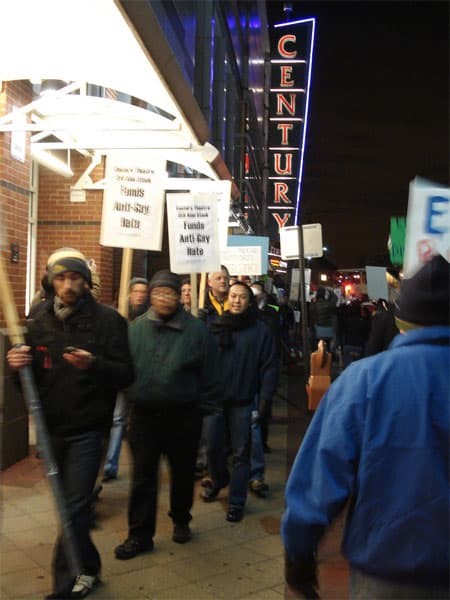 A massive protest targeting Alan Stock, the Mormon owner of the Cinemark theatre chain who donated $9,999 to the Proposition 8 campaign, took place in Evanston, Illinois over the weekend. the protest was organized by Chicago’s Gay Liberation Network and its organizer Andy Thayer, who speaks in the video below.

“‘If you’re going to target our community with hate, whether it’s Prop. 8 or any other measure going forward, it’s no longer going to be without consequences,’ said Andy Thayer, Weinberg ’85, the co-founder of Chicago’s Gay Liberation Network. ‘We are going to hit you in the pocketbook just the way you hit us in terms of our rights.’ The Gay Liberation Network began planning a response to Stock’s donation on Nov. 15 during the Chicago rally against California’s Proposition 8, a measure that bans same-sex marriage. ‘This is a local protest that should keep the pot stirring until we have the next national day of protest,’ Thayer said. Cinemark Theatres, an international corporation that includes Century Theatres and CinéArts, is the third-largest movie chain in the country. Managers of Evanston’s theater said they could not comment on the protest, and calls to Cinemark corporate offices were not returned.”

The New York Times reported on Friday about Cinemark’s plans to screen Milk, and how various parties are responding to it: 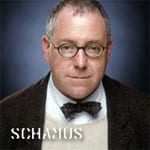 “In a particularly ticklish exercise, [Focus Features] continues to plan showings of ‘Milk’ in theaters owned by the Cinemark chain, whose chief executive, Alan Stock, donated to the campaign for Proposition 8. Taking a cue from Milk — who made his political breakthrough by supporting a union boycott of Coors beer — opponents of the marriage ban have begun their own boycott through a Web site, NoMilkforCinemark.com. In a statement issued on Wednesday, Cinemark, one of the country’s largest theater chains, said its decision to proceed with plans to show the movie also reflected a principle: ‘It would be inappropriate to influence our employees’ position on personal issues outside the work environment, especially on political, social or religious activities.’ On Thursday James Schamus, the chief executive of Focus, struck a diplomatic note. ‘I know there’s a lot of anger out there,’ said Mr. Schamus, who noted that Cinemark three years ago was among the first chains to embrace the studio’s gay-themed ‘Brokeback Mountain.’…’I hope that gets settled,’ he said of the boycott call.”

Two more videos, including one from Chicago Examiner blogger Michael Lehet,
AFTER THE JUMP…