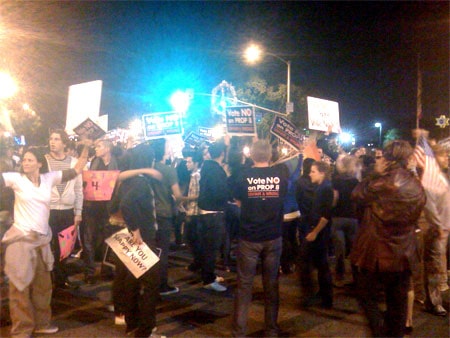 Three lawsuits have been filed opposing the passage of Proposition 8.

Last night we showed I showed you our reader Joe’s photos from San Francisco. This morning, our reader Peter files this extended report (w some iphone photos) of the rally that happened last night over Prop 8 in West Hollywood: 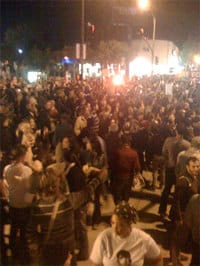 The rally in West Hollywood began at 7:00 PM at the corner of San Vicente and Santa Monica Boulevard. Initially, crowds were contained on the sidewalks, but the crowd soon seemed to break through one of the barricades and spill into the streets. The West Hollywood Sheriff’s Department immediately shut down Santa Monica Boulevard and San Vicente Boulevard diverting traffic away from the intersection. The crowd stayed in the middle of the intersection for at least 30 minutes. There were chants of “No On 8!” and “Equality! Equality! Equality!” and of course “Yes, we can! Yes, we can! Yes, we can!”

Eventually, the crowd began to drift toward a stage set up on San Vicente just south of Santa Monica Boulevard. Lorri L. Jean, the director of the L.A. Gay and Lesbian Center welcomed the crowd. She said that the CA Secretary of State’s Office has not confirmed the outcome of Prop 8 due to the fact that millions of provisional and absentee ballots still have not been counted. Lorri Jean cautioned against false hope, however, saying that the chances of victory for us are very, very slim. 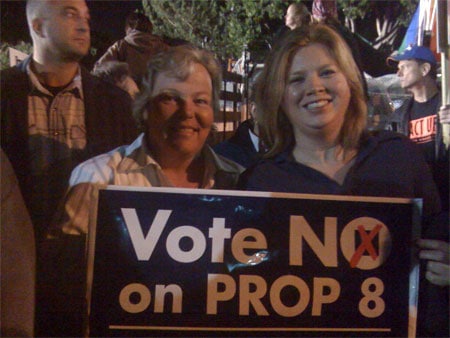 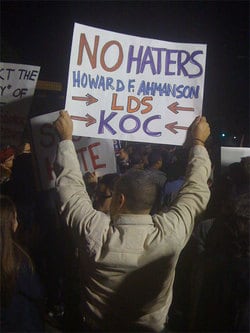 Councilmember Duran, whose voice was hoarse and who said he had gotten out of bed to attend the rally, gave a speech in which he described his happiness upon hearing that Barack Obama had been elected U.S. President, his disappointment when he learned Prop 8 seemed likely to pass and his feeling of crushing sadness when he learned that Black residents of California had voted against us in large numbers. Councilmember Duran, a Latino, stated that on election night Latino men were reported to have driven up and down Santa Monica Boulevard in West Hollywood holding signs that said “Faggot” and “Queer”. Duran then discussed the fact that while many people of color voted for Prop 8, there were also many, many people of color who had voted against it. He cautioned the crowd to avoid making assumptions, based on someone’s skin color, about whether or not that person is supportive of the GLBT community. 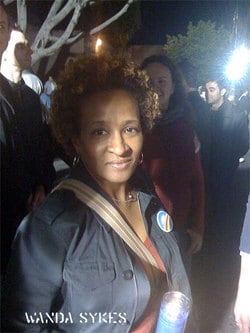 Duran then segued into a plea for the GLBT community to reach out to other minority communities to create understanding and acceptance. He called for all minority groups to band together to fight oppression saying, “If you are asking me to fight for you because you are Black or Latino or Asian, you must fight for me as well.” He closed saying that it is pointless for minority groups to play the game of comparing suffering saying that “There is no winner in the game of who is on the bottom rung of the ladder.”

There were speeches from Jeffrey Prang, Abbe Land and others.

Lorri Jean, whose maternal side of the family was Mormon, reported that the Mormon Church gave anywhere from 45-77% of the donations to Yes On Prop 8. She invited the crowd to join her at at the Mormon Temple on Santa Monica Boulevard (at Selbee) at 2:00 PM on Thursday for a meeting with the Mormons and a press conference. She stated that more details could be found on the website for the Los Angeles Gay And Lesbian Center. 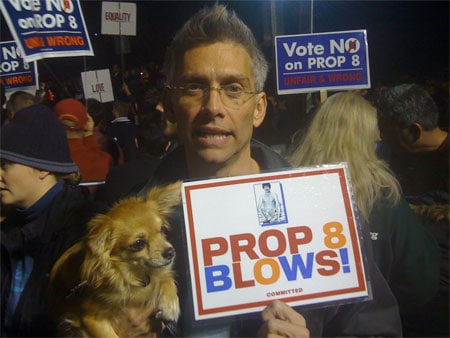 Following the speeches, members of the MCC Church led the crowd in singing “We Are Gentle Angry People And We Are Singing For Our Lives”.

Some people in the crowd then marched spontaneously, and peacefully, toward the intersection of Sunset Boulevard and Highland in Hollywood. The crowd snarled traffic along the way. According to friends who marched to Hollywood, people stuck in traffic due to the march were generally supportive of the protestors. Once the crowd reached Hollywood and Highland, they were met with a barricade of L.A.P.D. in riot gear. The crowd began to chant “Let us through! Let us through!”, but the police remained in place. 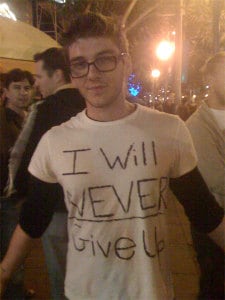 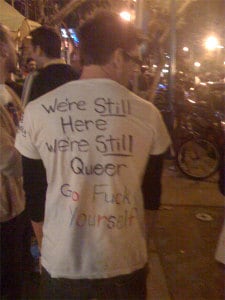 Eventually, three, or possibly four, younger guys in the crowd pushed their way over the police barricades. One of the men was reported to have jumped on top of a police car. Witnesses told me the police began to beat the men with their truncheons. Eventually, the men were arrested and the crowd began to march back to West Hollywood where the protest continued well past midnight.

A bunch more photos, AFTER THE JUMP… 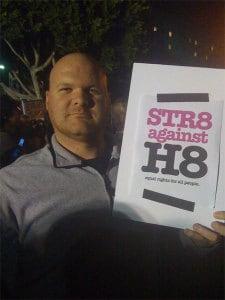 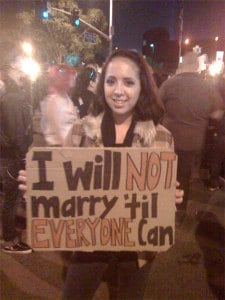 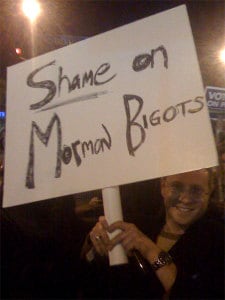 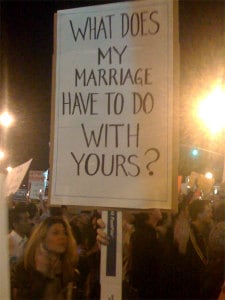 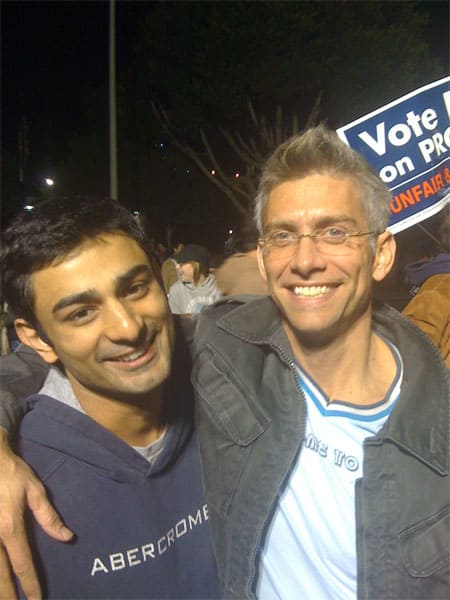 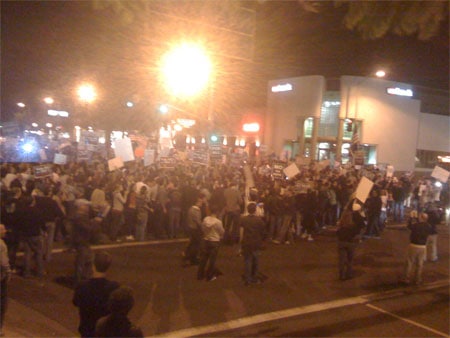 Also, indiewire has a nice report…

As does Boi from Troy…

As does The L.A. Weekly…

Previous Post: « Here’s Steve Guttenberg for His Daily Central Park Half-Naked Jog
Next Post: Lance Bass Gets Caught in Sunset Blvd. Crowd of ‘No on 8’ Protestors »