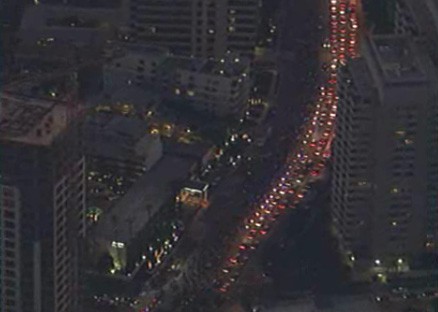 Right now approximately 3,000 demonstrators protesting the Church of Latter Day Saints’ funding of the Proposition 8 measure banning gay marriage in California have left a protest that began near the Mormon Temple in Westwood and have shut down major roads at rush hour. 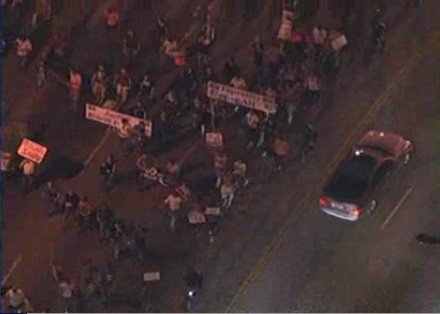 I took the screenshots above from the ABC live webcam at approximately 5:20 PM Pacific time. As you can see thousands are clogging one side of the street.

Intersections are also being blocked: 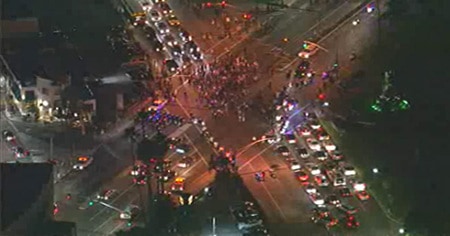 One of the initiatives the organizers announced was THIS ONLINE INITIATIVE to help the organizations working to invalidate Proposition 8, coupled with a postcard campaign to the President of the Mormon church. See PDF here.

In related news, a drive is underway to strip the Mormon church of its tax exempt status. See HERE. And more protests are planned. See HERE. 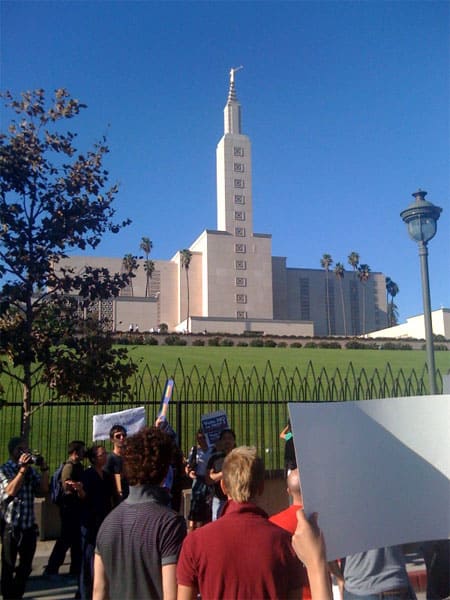 A Towleroad reader reported in at about 3:15 pm California time that people were arriving by the hundreds in the intense heat and sunshine, shouting “tax the Mormon church” and “shame on you!” He sent along these photos. Church officials were reported to be seen standing on the front porch of the church, some of them filming the crowd. 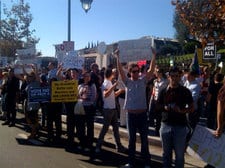 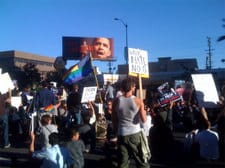 Our reader texted: “Lorri Jean just arrived and is leading the crowd in a call and response of ‘What do we want? – Equal Rights! -When do we want it? – Now!.” He added, “[There is] heavy traffic on Santa Monica Boulevard right in front of the temple. Drivers are very supportive…honking horns and giving thumbs up signs. Crowd is spilling into street clogging traffic.” 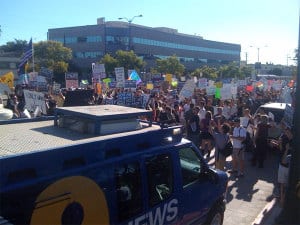 Half an hour later, at 3:45, our reader texted, “Thousands of protesters are here now…crowd is circling the temple perhaps because the back of the temple is closer to the street. Homeland security is here. Toward the beginning of the protest I saw LAPD on a gold cart-like vehicle driving by the crowd filming participants.”

He adds, “Funniest chant so far: ‘Bring me the head of Donny Osmond!'”

Here is a live shot I just took off the ABC website in L.A. Watch Live now. It’s approximately 5:15pm there as I post this. 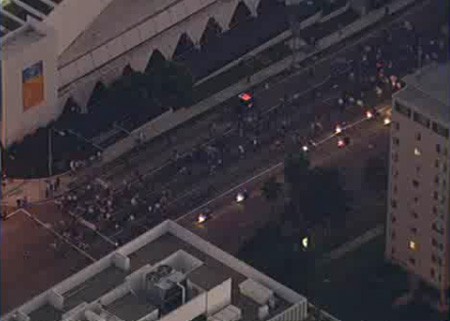 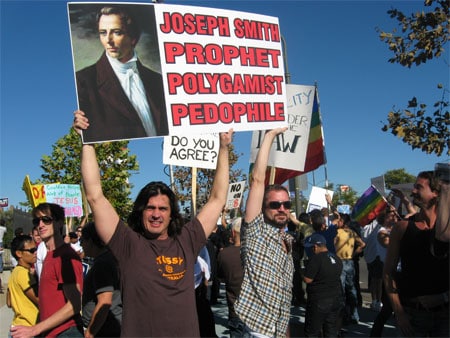 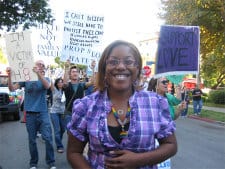 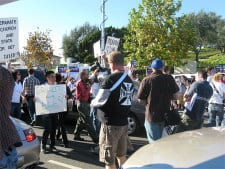 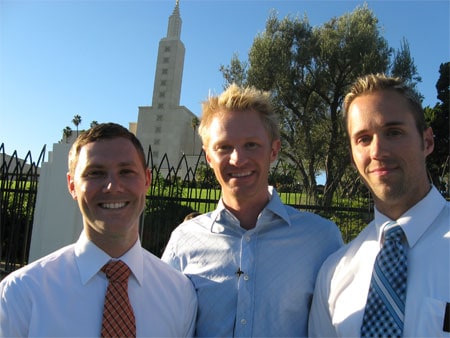 Jim Key of the L.A. Gay & Lesbian Center wrote in to me as well. He sends these additional photos and says: 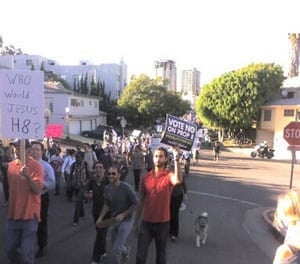 “Despite the fact that the event was on a weekday, in the middle of the day, and in Westwood, there were 2,000-3,000 people there. In front of the temple we had a news conference, at which Lorri Jean announced the launch of www.InvalidateProp8.org and denounced the leaders of the Mormon Church for helping to raise more than $15 million to fund the deceitful ad campaign that helped Prop 8 pass by a small majority. Jorge Valencia, a former Mormon and ED of the Point Foundation spoke passionately, as did Rev. Neil Thomas, also a former Mormon. Then we marched all the way around the perimeter of the Temple, on side streets, while many people in the neighborhood cheered us on. After we came full circle, about 1,000 protesters kept marching to Wilshire Blvd. and the Federal building. Naturally, the Temple Gates had been locked and even topped with barb wire. As of 9 p.m. now, many are STILL marching. If there’s any silver lining to this, it’s that our defeat on Prop. 8 may result in a whole new generation of activists. It’s so inspiring to see that so many of the marchers and protesters are young people who have never done something like this before.

Here’s the AP report on the march via the SF Chronicle.

Shots from two other readers, AFTER THE JUMP… 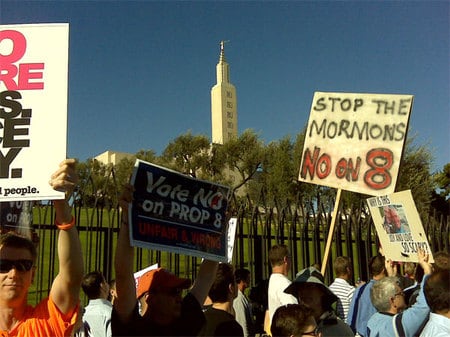 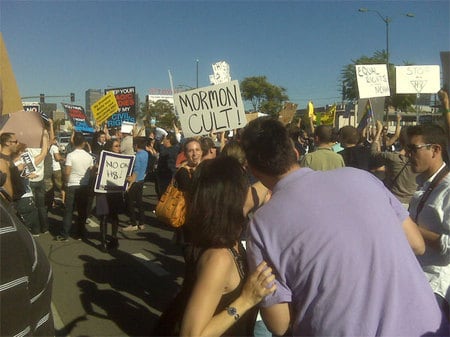