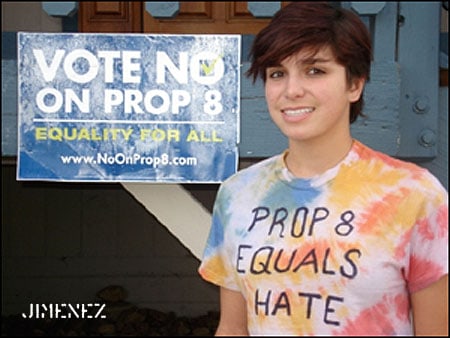 The ACLU has intervened in a situation at Big Bear High School involving its sophomore class president and her desire to wear a home-made T-shirt expressing opposition to California’s Proposition 8, which banned same-sex marriage in the state. 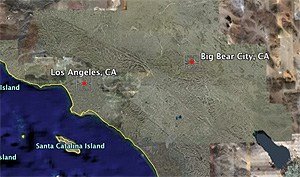 According to The Sun, “The 16-year-old sophomore, who is her class president, wore the tie-dyed T-shirt to school on Nov. 3, the day before voters approved the constitutional amendment prohibiting same-sex marriage in California. Mariah’s sixth-period teacher, Sue Reynolds, ordered her to remove the shirt during a meeting of the Associated Student Body. When Mariah protested, Reynolds sent her to the principal’s office. ‘She said I shouldn’t be wearing such divisive shirts, and my shirt draws a line down the school,’ said Mariah, who also plays on her school’s golf and softball teams and has been involved in school politics since seventh grade. Principal Michael Ghelber gave Mariah an ultimatum: Remove the shirt or remain in his office. Under protest, Mariah changed shirts and returned to class. Then, she went to the ACLU.”

Attorneys for the ACLU of Southern California have sent letters to the school demanding Jimenez be allowed to wear the T-shirt and asking for an acknowledgement from school officials that their actions were unlawful:

“Citing extensive federal and state law on free speech, ACLU/SC staff attorneys Peter Bibring and Lori Rifkin state in the letter that a school may not simply prohibit speech because it presents a controversial idea and could incite opponents of the speech to cause a disruption. Schools can only prohibit speech that incites disruption because it specifically calls for a disturbance, or because the manner of expression is so inflammatory that the speech provokes a disturbance.”