Wildly popular crime writer Patricia Cornwell, the author of 25 books, who was outed in the mid-90’s after her affair with the wife of an FBI agent was revealed, is now married to another woman, lives in Massachusetts, and has decided it’s time for her to speak out about marriage equality. 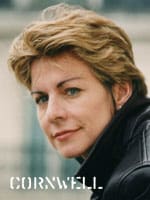 “At my age, I have been around a while now and I am less uncomfortable with those sorts of revelations than I used to be. Maybe it is a function of getting older but I think it is important to stand up and be counted. When you’re not in a relationship your sexual orientation is more theoretical but it becomes more real when you are with somebody and you are not going to hide that. If people like me don’t take a stand then it will only get worse. We just want to live and let live and be treated in the same way straight people are treated. It is no longer theoretical when you have people voting against what you believe is your right, making it illegal, when one of the best things about me is the person I am with. This applies to me and it is frightening.”

Probably not coincidentally, Cornwell also has a new book coming out in her ‘Kay Scarpetta’ series entitled Scarpetta. Reuters notes: “Her character Scarpetta’s niece Lucy is a lesbian who ends up in a relationship with a female prosecutor, a public figure, who has to decide how open she wants to be about her personal life.”