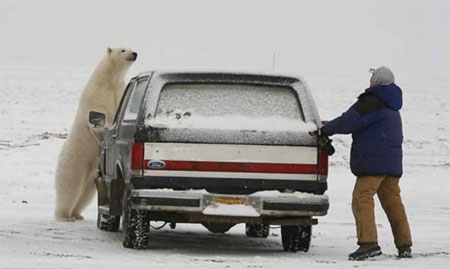 Food appears to be getting scarce in Barrow, Alaska:

“The target, a surveyor, was returning to his car in the remote town of Barrow, Alaska, when he saw the great white beast. With no time to unlock the door of his vehicle and climb inside, he tried to duck out of sight. But the hungry bear was not giving up, and a terrifying chase began. First, the beast stood up on its furry haunches and eyed its prey. Then it loped around the car, and even climbed over the bonnet to try to reach him. After a few laps of the car the bear almost caught up, managing to land a few heavy swipes on his prey. The man eventually managed to take refuge in a neighbouring truck which was unlocked. His back and head were covered in more than 100 deep scratches where the massive claws had managed to rip through his thick winter clothes and padded coat. Barrow is the northernmost town of the United States, 340 miles north of the Arctic Circle.”

That bear was lucky it wasn’t in Iceland. 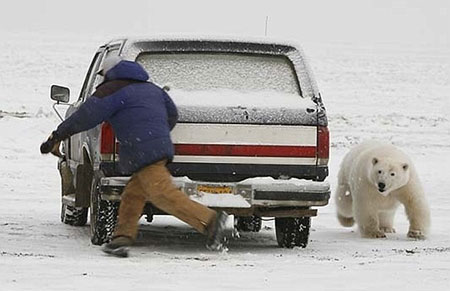