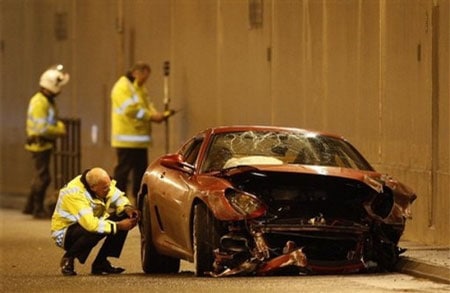 Cristiano Ronaldo totaled his Ferrari worth more than $300K at 10:20 am this morning in Manchester, UK, and walked away shaken but uninjured:

“The front of the Ferrari 599 GTB, which reaches a top speed of 205mph, was completely crushed after absorbing the impact of the crash. Metal debris, including the front left wheel, was scattered across the road. The 23-year-old Portuguese international, who will need less than two weeks of his salary to recoup the money for a new car, was unscathed and later made his way to training. It is being reported that Ronaldo’s Manchester United team-mate Edwin van der Sar, who plays in goal, was allegedly driving the car behind the star at the time of the crash…The accident occurred just two days after Ronaldo had the supercar imported from his native Portugal into Britain.”