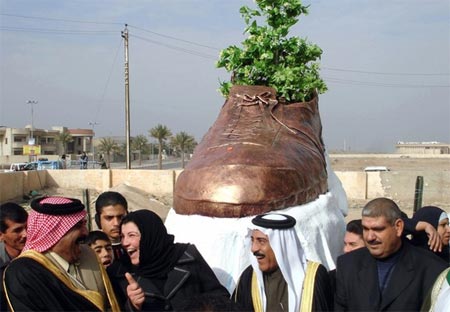 Considering all the bluster from the former administration about its success in Iraq, one might expect the Iraqis to unveil a statue of the American leader who “liberated” them.

Instead, a bronze statue of a shoe has been unveiled in the northern Iraqi city of Tikrit in honor of Muntazer al-Zaidi, the journalist currently imprisoned for throwing his footwear at George W. Bush. An inscription reads: “Muntazer: fasting until the sword breaks its fast with blood; silent until our mouths speak the truth.”

The shoe is filled with a plastic shrub.

Said Fatin Abdul Qader, head of the orphanage and children’s organisation in the town outside which the shoe monument has been placed: “This statue is the least expression of our appreciation for Muntazer al-Zaidi, because Iraqi hearts were comforted by his throw.”

Al-Zaidi’s trial has been delayed and his lawyer has been attempting to have the charges reduced.

UPDATE: Shoe statue taken down after request from central government. Said Abdullah Jabara, Salaheddin deputy governor: “We will not allow anyone to use the government facilities and buildings for political motives.”

Watch raw AP video of the copper and fiberglass shoe, AFTER THE JUMP…

Previous Post: « Court: ‘Yes on 8’ Donors Must Remain Public
Next Post: Jonathan Rhys-Meyers Sits on a Throne of Naked Men »