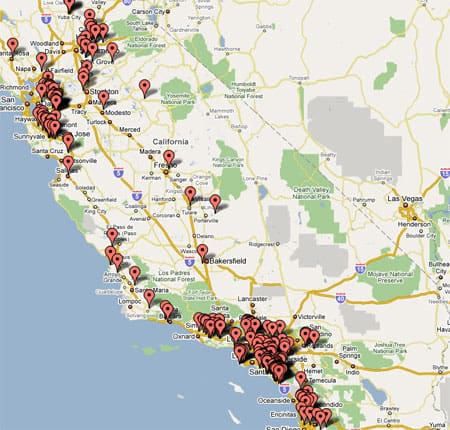 For those of you who are visually inclined, a tipster sent in the above map to take you to a Google Map/Prop 8 donor mash-up, showing locations of folks who donated to “Yes on 8” along with the available info. This may have been around for a while, but it’s the first time I’d seen it.

A couple new developments on that front: 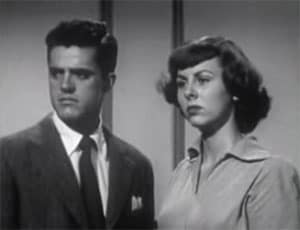 Supporters of Prop 8 have filed a lawsuit seeking to block their campaign finance reports from the public: “The lawsuit, filed Wednesday in federal court in Sacramento, asks the court to order the secretary of state’s office to remove all donations for the proposition from its Web site. The groups announced the lawsuit Thursday. It also asks the court to relieve the two groups and “all similarly situated persons” from having to meet the state’s campaign disclosure requirements. That would include having to file a final report on Proposition 8 contributions at the end of January, as well as reports for any future campaigns the groups undertake…The lawsuit by Bopp’s clients cites a series of incidents in which those who gave money to support the ballot measure have received threatening phone calls, e-mails and postcards…Businesses have been threatened with boycotts because people who worked there contributed to the Proposition 8 campaign, the suit said.” 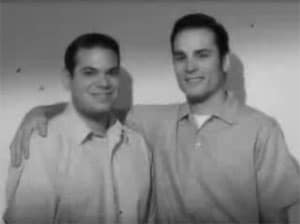 Equality California called the lawsuit hypocritical in a press release: “This lawsuit could not be more hypocritical. During the Proposition 8 campaign, the very same groups who filed this legal challenge sent menacing letters to Equality California’s donors, as well as corporations, labor unions, and individuals who stood up to discrimination and supported the No on 8 Campaign. Now they are calling themselves the victims. What’s more, these groups are arguing on the one hand that voter initiatives like Prop 8 should never be overturned by courts. On the other, they are asking a federal court to void a campaign reform law that was passed by voter initiative in California. They are asking that donations to Yes on 8 and only Yes on 8, even if illegal, be hidden from the public. This leads us to wonder what they have to hide?”

What are these black and white images from? Check out the video, AFTER THE JUMP… 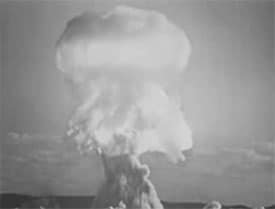 Californians Against Hate responded to the lawsuit as well: “These very contributors to the Yes on Prop 8 campaign have spent months gloating about their enormous contributions to take away the rights of a minority and write discrimination into the California Constitution. And now they want to keep these names secret? This is despicable. The Mormon Church is currently under investigation by the California Fair Political Practices Commission (FPPC) for not reporting vast amounts of non-monetary contributions to the Yes on 8 campaign. The Salt Lake City based church ran out of state phone banks, established web sites, produced slick commercials, videos and satellite simulcasts, printed campaign materials, bussed in thousands of church members into California from Utah and other states and apparently failed to report these activities. Now the Mormon Church and their allies are hoping to keep secret all of their contributions, this is crazy.” 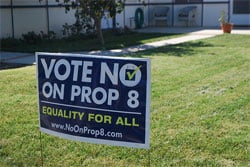 A resident of the Bay Area peninsula city of Menlo Park was reportedly asked by police officers to remove the “No on Prop 8” sign from her front yard: “Two police officers knocked on the door of a Menlo Park resident yesterday morning and told her to remove her yard sign against Prop. 8, the same-sex marriage ban. Teresa Ryals told the Post that the officers were ‘very apologetic’ but said the sign on Central Avenue must be removed immediately. Police were acting on a complaint received by the office of City Manager Glenn Rojas. An anonymous caller complained the sign, which said “Vote no on Proposition 8 — it’s unfair and wrong,” was still standing in the Ryals’ yard two months after the election. The officers visited two other homes in the Central and Laurel neighborhood, also asking that their signs be taken down, according to Menlo Park Police spokeswoman Nicole Acker. … Acker did not know if the code section had been enforced after previous elections.”

In related news, Timothy Kincaid at Box Turtle Bulletin blog took a look at the NGLTF’s recent report that concluded that exit polls regarding Proposition 8 and the Black vote were exaggerated. He believes that there’s some wishful thinking in their numbers and offers an analysis and some ideas.

Jerry Brown’s switch on Prop 8 reflects the times, lawmakers say…”Sheila Kuehl, the former California assemblywoman who became the first openly gay state legislator, said Brown’s actions do reflect the enormous change that has occurred on an issue now at the epicenter of a national controversy…With Brown leading the field of potential Democratic gubernatorial contenders, the issue underscores a potential dilemma for one of California’s most visible and experienced elected officials…Still, he could be challenged on the issue by San Francisco Mayor Gavin Newsom, who has strong backing among gays and lesbians for allowing the state’s first same-sex marriages at San Francisco City Hall in 2004..”

Check out the satirical video, What About Gay Marriage, AFTER THE JUMP…