A domestic partners bill has begun to make its way through the New Mexico legislature, getting a narrow 5-4 approval from the Senate Public Affairs Committee Wednesday. The bill now heads to the Senate Judiciary Committee: 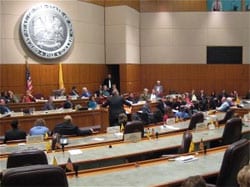 “Judiciary Committee Chairman Sen. Cisco McSorley, D-Albuquerque, said Wednesday night that unlike last year he had enough votes to push the bill through his committee. If that happens, the bill could go before the entire Senate for a floor vote as soon as next week. Advocates say that after three years of lobbying this year represents the best shot for New Mexico to become the first state in the middle of the U.S. to extend many of the same rights enjoyed by married couples to same-sex couples, which is what domestic partnerships would do. With the exception of Hawaii, all the states that recognize same sex marriage, civil unions or domestic partnerships are on the East Coast or West Coast.”