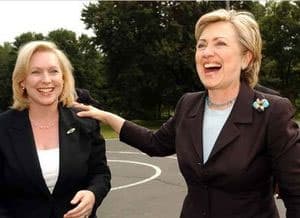 While Rep. Kirsten Gillibrand said in a recent interview that she supports a step-by-step approach to achieving marriage rights via civil unions and then advocating state by state for the “title” of marriage, Ben Smith at Politico reports that “she assured the state’s leading gay rights group yesterday that she backs same-sex marriage, and shows no other conservative leanings.”

“After talking to Kirsten Gillibrand, I am very happy to say that New York is poised to have its first U.S. Senator who supports marriage equality for same-sex couples. She also supports the full repeal of the federal DOMA (Defense of Marriage Act) law, repeal of Don’t Ask Don’t Tell (DADT) and passage of legislation outlawing discrimination against transgender people. While we had a productive discussion about a whole range of LGBT concerns, I was particularly happy to hear where she stands on these issues.”

According to HRC, that’s not how she’s voted in the past though. As noted earlier, via PolitickerNY:

“According to the Human Rights Campaign, she voted against the repealing of ‘Don’t Ask, Don’t Tell’ legislation, opposed legislation that would grant equal tax treatment for employer-provided health coverage for domestic partners, opposed legislation to grant same-sex partners of U.S. citizens and permanent residents the same immigration benefits of married couples and opposed legislation to permit state Medicaid programs to cover low-income, HIV-positive Americans before they develop AIDS. That said, Gillibrand is not an ideologue. The positions she took were arguably necessary as a means of getting elected in a conservative-voting district. And there is a notion among political observers that if she represented the entire state, those positions would soften to better reflect New York’s more liberal complexion.”