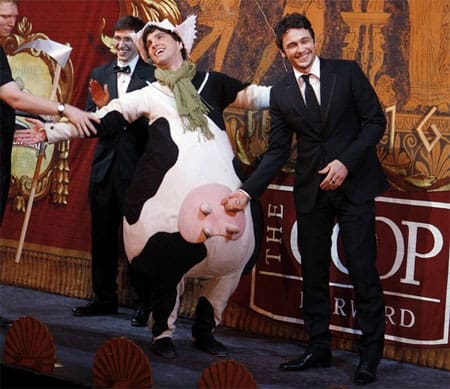 James Franco was honored as Hasty Pudding Man of the Year last night by Harvard’s Hasty Pudding club in an annual roast saluting entertainers that traditionally includes plenty of sight gags and drag. Last night’s event, which included a spoof bar mitzvah, took on Franco’s more recent performances (in Milk and Pineapple Express) as well as some older ones: 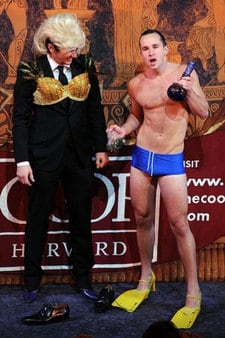 “During the roast, the actor was also confronted by the traditional Hasty drag queens, a scythe-wielding character representing the death of his career and a gay cow whose udder he was asked to milk. (The Hasties snuck a comedic bar mitzvah in as well, with Twaalfhoven declaring ‘You’re a man now.’) He received his golden pudding pot wearing an eye patch, blonde wig, purple heels and a gold-spangled pineapple-shaped bra, representing his movie, ‘Pineapple Express.’ ‘I’ve made it,’ he said. After the ceremony, the actor said the bar mitzvah was ‘actually really touching. I’m Jewish, my mother’s Jewish, but I wasn’t raised Jewish. I guess I wasn’t a man until tonight.’ He said parts of the roast surprised him and were not actually accurate. ‘I was never in ‘The X-Files,’ he said, referring to a joke about him playing X-Files guard number two. He also confessed that he joined his high school drama club to get revenge on his girlfriend at the time, who did a play with another boy. ‘And I was really jealous,’ he admitted. So when he was cast as the lead in his first play – and he got to murder his wife in the production – he felt validated. ‘I learned how cathartic acting could be.’ Franco ended his post-roast press conference by kissing his pudding pot (‘Kiss the pot?’ he asked. ‘Is that a tradition?’) But he admitted it was not his most functional award. ‘I won a stoner of the year award from High Times magazine,’ he said, of being honored for his role in ‘Pineapple Express.’ He sent it to his parents for safe-keeping. ‘Unfortunately it cracked in the mail, so they haven’t been able to use it.'”

The award has been given since 1967. The club’s first honoree was Bob Hope. 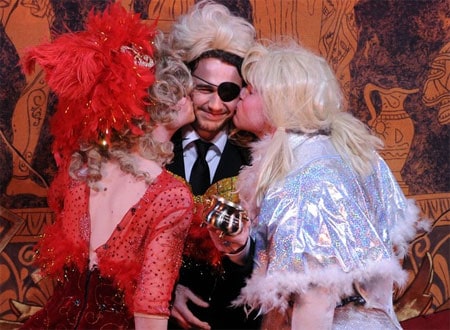