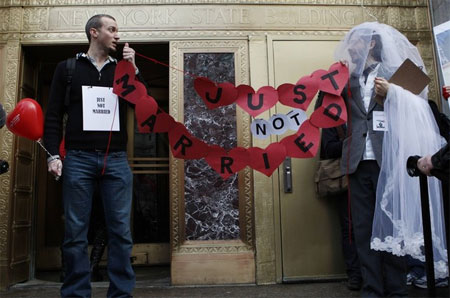 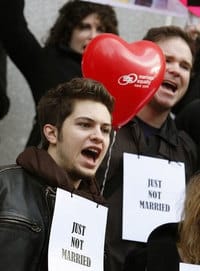 “Micah Stanek, 23, stood outside in a floor-length wedding veil after he and his partner were rejected. He said he moved to New York from San Francisco after gay marriage was outlawed in California on the November ballot. ‘New York is especially important because the rest of the country follows what happens here,’ he said. Outside the bureau, protesters sang ‘Love and Marriage’ and chanted, ‘What do we want? Marriage! When do we want it? Now!’ One man held a sign that read: ‘Love your husband? Let me love mine!’ The protests, part of the 12th annual Freedom to Marry Week, were considered more important than ever this year because they come in the wake of California’s Proposition 8 vote that overturned gay marriage and just as New Yorkers look to their state Senate to pass legislation that could lead to legalized gay marriage. Some of the largest gatherings were expected in California, where the state’s Supreme Court will hear oral arguments March 5 over whether to restore California same-sex marriages. The court could render a decision as early as June.”

Freedom to Marry Week will culminate in a rally on February 16th at the California state capitol in Sacramento and Equality California Lobby Day on the 17th, a day of coordinated advocacy and activism.

NOTE: Jeremy at Good as You points out that there is a link for the anti-gay Family Research Council at the bottom of the afore-linked AP article. Why?

And if you missed it last week, I’ve reposted the Courage Campaign’s “Fidelity” video, which is a must-watch, AFTER THE JUMP… 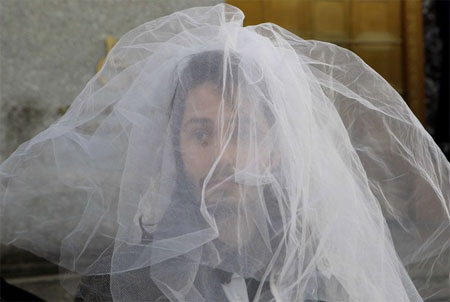